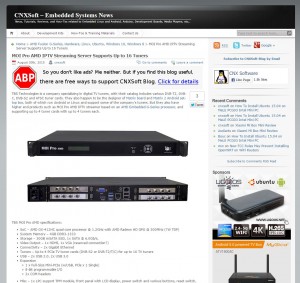 With AMD Embedded G-Series SoC inside, MOI Pro – AMD provides more possibilities to IPTV system integrators and TV service operators, it allows you to use not only Linux and Ubuntu, but also Windows. Open source software such as Kodi(XBMC), OpenPCTV and VDR are pre-installed to create a read-to-run platform.

Embedded AMD board for Professional Streaming Solutions.
http://www.tbsdtv.com/products/iptv-streamer-moi-pro-amd.html
Big thanks to TBS crew (Bob , Steven & James) for the lab & hardware provided.
Special thanks to Chris & Theo from www.xtream-codes.com for providing me full access to xtream-codes panel

With AMD Embedded G-Series SoC inside, MOI Pro – AMD provides more possibilities to IPTV system integrators and TV service operators, it allows you to use not only Linux and Ubuntu, but also Windows. Open source software such as Kodi(XBMC), OpenPCTV and VDR are pre-installed to create a read-to-run platform.

DVB-S2X is an extension of the DVB-S2 specification that provides additional technologies and features. DVB-S2X
has been published as ETSI EN 302 307 part 2, with DVB-S2 being part 1. S2X offers improved performance and
features for the core applications of DVB-S2, including Direct to Home (DTH), contribution, VSAT and DSNG. The
specification also provides an extended operational range to cover emerging markets such as mobile applications.

Background
DVB-S2 has been specified about 10 years ago with a strong focus on DTH. Since then, new requirements have
come up and DVB-S2X provides the necessary technical specifications. This work was done by the DVB Technical
Module sub-group on satellite chaired by Dr Alberto Morello (RAI), who also led the work on DVB-S2. S2X supports
significantly higher spectral efficiency for the Carrier to Noise Ratios (C/N) typical for professional applications such as
contribution links or IP-trunking. It also supports very low C/N down to -10 dB for mobile applications (e.g. maritime,
aeronautical, trains, etc.).

How does it work?
DVB-S2X is based on the well-established DVB-S2 specification. It uses the proven and powerful LDPC Forward Error
Correction (FEC) scheme in combination with BCH FEC as outer code and introduces the following additional elements:
• Smaller roll-off options of 5% and 10% (in addition to 20%, 25% and 35% in DVB-S2)
• A finer gradation and extension of number of modulation and coding modes
• New constellation options for linear and non-linear channels
• Additional scrambling options for critical co-channel interference situations
• Channel bonding of up to 3 channels
• Very Low SNR operation support down to -10 dB SNR
• Super-frame option
This results in the following spectral efficiencies for DVB-S2X compared to DVB-S2:

The usable C/N range is extended for values down to -10 dB by additional framing, coding and modulation options,
which will enable satellite services for mobile (sea and air) and very small directive antennas. For VSAT applications the
S2X specifications open up the possibility to support advanced techniques for future broadband interactive networks,
i.e. intra-system interference mitigation, beam-hopping as well as multi-format transmissions. These may result in
significant gains in capacity and flexibility of broadband interactive satellite networks and are made possible thanks
to the optional Super-Framing structure.
DVB-S2 already offered excellent spectral efficiency for DTH applications and S2X therefore could not produce
physical layer gains comparable to the transition from DVB-S to S2 (i.e. around 30%). Nevertheless, for DTH DVBS2X
fine-tunes both the physical and the upper protocol layers of DVB-S2, producing a highly attractive package (for
new generation services, which would require new receivers in any case).
The most relevant features for DTH are channel bonding and finer granularity of modulation and FEC options combined
with sharper roll-offs. Channel bonding of up to 3 satellite channels will support higher aggregate data rates and allow
for additional statistical multiplexing gain for high data rate services such as UHD. The mandatory implementation of
VCM (Variable Coding and Modulation) in receivers offers the possibility of increasing the spectral efficiency for UHD
services, while guaranteeing service continuity during heavy rain by simulcasting highly protected SD components.
A finer granularity of modulation and FEC options allows for improved operational flexibility.
For Professional and DSNG applications high efficiency modulation schemes allow spectral efficiencies approaching
6 bps/Hz (with 256APSK). C/N values of up to 20 dB are now supported with an achievable gain improvement of up
to 50%.

DVB-S2X was published as a DVB BlueBook in March 2014. Already soon after this, basically all relevant providers
for professional satellite transmit and receive equipment announced their support for the new specification.

DVB-S2X has been introduced at the same time as the new efficient HEVC video coding scheme. It is expected that
new satellite receivers will combine these two technologies to make the delivery of HD and especially UHD services
more efficient.